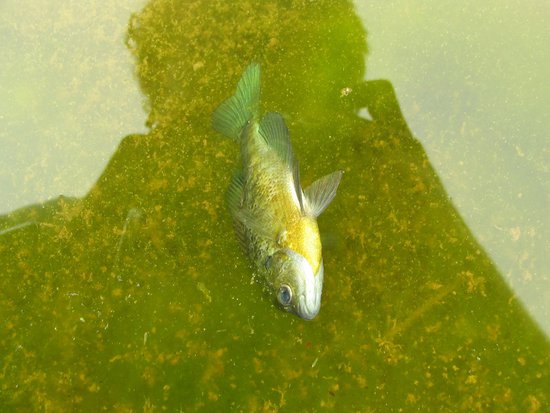 This was at the end of a spillway from a lake. The water was choked with algae and trash, partially dammed by a concrete walkway running crosswise. As I passed over the walkway, I saw a fish lying upside-down in the water, not moving -- obviously dead, right? That's when this picture was taken. But it moved when I touched it, and swam away on its side. I managed to catch it (it put up a very small fight), and transferred it to the other side of the barrier, where other fish were thriving. Who knows? Maybe it was just pinin' for the fjords...

This image is available under either the GFDL version 1.3 or the CC-by-sa version 3.0. Essentially, this gives you the following rights:

If you want to use this image without attribution, I may offer you an alternate license in return for compensation. Contact me with a proposal.

Want to email me about this photo?

Remember, if the image is under a free license, you don't have to ask permission to use it within the terms of the license.